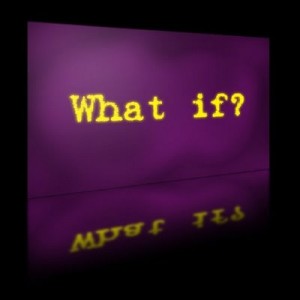 As a parent, it’s easy to drive yourself nuts wondering if the mistakes you’ve made with your children have caused them irreparable harm. “What if I hadn’t screamed at him about dumping milk all over the floor?  Will he hate me forever?”  “What if I hadn’t let her climb down those stairs she fell down?  Will she be afraid of stairs forever?” “What if we had had another child?  Would the children we have feel more complete?  Happier?  Sadder?”  And oh so many other “what ifs”, innumerable ones, “what ifs” that range from absurd to realistic and everything in between.  It’s hard to let go of “what ifs” or stop them or beat them into submission.

My “what ifs” for my son on the spectrum got delayed quite a bit because diagnosing him was such an all-consuming process.  We simply didn’t have room in our brains for “what ifs.”  Then the first one came via a close friend who kindly advised me that my husband and I shouldn’t torture ourselves wondering what if our genes were at fault for our son’s autism.  I was startled by her words.  To me, if genetics were at fault (and I believe they partially are), then there’s nothing my husband or I could’ve done short of not having children, which wasn’t an option.  Life without either of our sons is unimaginable.  Okay, I can imagine it – the quiet, the solitude, the lack of fighting – and the boredom.  Much as I bitch about my boys (my husband included), I wouldn’t trade them in, though I could easily be persuaded to live alone a few days a week.  They keep life exciting, interesting, frustrating, exhausting and exhilarating.  So that first “what if” didn’t bother me.

However, now that both of our boys are more settled, and are maturing and growing into human beings I’m both in awe of and pissed at because they’re developing minds and mouths of their own that can be infuriating, I’ve found “What ifs” creeping into my consciousness that I didn’t expect.

What if during my pregnancy with our son on the spectrum, I had induced labor a week early the way the doctor had wanted me to?  Instead, our beautiful boy grew so big during that last week of pregnancy that after two days of labor and two and a half hours of pushing, he got stuck and was delivered via emergency C-section.  What if during that whole, long birth process, he was deprived of just enough oxygen to cause his autism?  Mind you, there’s a strong genetic link in our family to Asperger’s and autism.  Our son is not an isolated case in a family of otherwise completely typical people.  But what if my son’s birth experience was the tipping point that pushed him over the edge into autism?  That “what if” nags at me in a way that past events you can’t change do.

What if I’d followed my gut when my son was six weeks old and he burst into gasping sobs when my mom laughed loudly as she sat next to him?  In that moment, I thought, “Uh oh. We have a problem.”  A problem that even then felt like autism to me.  Not that I knew much about autism but I did know that autistic children were unusually sensitive to noise.  And his reaction simply wasn’t typical.  But when my son was six weeks old, there was no way to diagnose autism.  There still isn’t, though children now are being diagnosed when they are as young as six months old.  But what if?

What if I’d followed my gut as my son grew older and I noticed his ever-increasing sensitivity to noise, his unusual lack of boundaries with strangers, and his lagging language/social skills?  Granted, he was in speech therapy from the time he was four and I repeatedly asked if he could be autistic but what if I’d ignored my pediatrician, our speech therapist and every other professional who worked with him, who kept telling me, “Your son isn’t autistic.  He’s too connected to other people.”  And he was.  My son has always loved other people, empathized with them and wanted to be near them.  But what if I’d taken him to a developmental pediatrician from the moment my red flags began waving?

The “what ifs” I’d rather focus on, when I’m not wrestling the other ones to the ground, are “what ifs” about my boys’ futures.  What if they want to go to college out of state?  Will I be able to let them go without constantly worrying they’ll be hurt emotionally or physically?  Probably not.  But I can help them grow into men who are strong enough to handle all that life throws them with grace, dignity and perseverance.  What if they marry women or men I don’t like?   Will I be the mother-in-law from hell?  I already know the answer to that one, so all potential unlikeable spouses, you’ve been warned.  But I can teach my sons to choose partners who treat others with respect and kindness.  What if my boys stumble, fall and don’t want to get up?  Will I be strong enough to help them stand and move on?

I know the answer to that “what if” too.  There have been so many moments in the past twelve years where I thought I wasn’t strong enough to bear what has come our way.  And yet I’ve recognized that the alternative – to give up and collapse – is not an option because giving up doesn’t solve the problems at hand, just like “what ifs” don’t.  Life happens.  It’s not always pretty.  It’s not always easy.  But it does always move forward.