“If you want to play with the big dogs, you can’t piss like a puppy.”

My Italian-American, New Jersey family uses this adage about as much as they use “Fuggedaboutit.”  And they admire smart-ass, tough women who can play with the big dogs, women like my grandmother, who had a piecework sweatshop in her backyard and ran for local Republican office even though her macho husband was a die-hard Democrat.

As a kid, I wanted to be a big dog too.  So, though I loved writing, musical theater and the arts, when I went to college, I put that “puppy” side of me on hold to 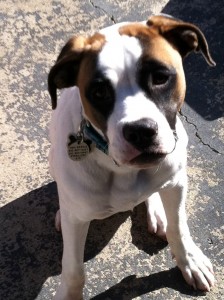 start Yale as a chemical engineering major.  I got the first C’s of my life.  Big dogs don’t get C’s.  I switched to fine arts but that didn’t last either because, even though I applied and was accepted into the major, I didn’t believe in my creativity enough to think I could be the best – a big dog.  It didn’t occur to me that creativity wasn’t about being the best.  It was about finding your inner creative voice.  I switched to English, where I knew I’d excel because my analytic voice and writing skills have always been strong.

But I couldn’t shake the feeling that I was pissing like a puppy.

When I moved to LA after college, I wanted to be a writer and a director, like zillions of us here in LA.  Instead, I became a Directors Guild assistant director via the Directors Guild training program.  An assistant director does not, as you might think, actively participate in the creative process of directing.  Instead, an assistant director manages film and TV sets.  It’s a tough, physical, “big dog” job and I was damn good at it.  I have excellent organizational skills, skills I was far more confident about than my ability to write or direct.  I was confident I would succeed.

And I did.  I got through the DGA Training Program in a year and ten months without one AD complaining about me (a feat in and of itself) and immediately started working. I was successful.  But I was also miserable.  I longed to create worlds of my own, populated by characters who spoke my words to express my thoughts, feelings and stories.

I needed figure out what kind of dog I truly was.

I quit AD’ing to write screenplays.  I’ve never looked back.  I did not, however, move forward in the way I expected.  I loved UCLA, where I got my MFA in screenwriting.  I wrote a new screenplay almost every quarter and explored ideas and stories and characters I’d been dreaming about for years.  But when I graduated, the big dogs came back to haunt me.  I wanted to be the biggest and the best screenwriter.  I stopped thinking about the stories I wanted to write and instead chased the market, determined to write a commercial screenplay.  I’d send my agent my ideas, which I structured around marketability, not my passion for them, and wrote what he thought he could sell.  It didn’t matter if he chose one of my ideas that I wasn’t particularly interested in.  I went for it anyway.  And wrote sterile, uninteresting scripts.

Then my son was diagnosed with high-functioning autism.  I write that line a lot.  It sounds dramatic and hell, let’s face it, it is.  It’s also a fact that changed everything in our lives.  I can chart our lives by BD (before diagnosis) and AD (after diagnosis).  Not surprisingly, my creative life is not exempt from this chart.

After Diagnosis, I was drowning in paperwork and doctors and IEPs and worry and fear and so many overwhelming emotions that I truly didn’t give a shit about writing.  In fact, I stopped writing for almost a year.  I followed my son around with a video camera twice in a year and made mini-documentaries about him, writing pages and pages of narrative to prove that he needed services to draw him out, help him cope, help us cope.

Big dogs no longer had a place in my life.

When my son got services after I turned in the mini-docs, along with pages of narrative I’d written to prove he was significantly enough affected by autism to need services (a ridiculous thing, I know – the fact that he has autism alone should qualify him), I was flooded by a sense of accomplishment and peace that I hadn’t gotten from screenwriting in years.  I realized it was time to take a new approach to my work and my life.

I dug deeper into my creative brain, thinking about what images, ideas and stories resonated with me and why.  I began writing a script based on a wonderful children’s book I’d optioned Before Diagnosis – MONSTER MAMA, written by the incredible Liz Rosenberg.  It’s the story of a boy whose mom is a monster and he can’t quite fit in with his peers because of her – or so he thinks.  It’s a story about insecurity, self-doubt, friendship and motherhood.  Oh how I could relate!  It has been one of the best writing experiences of my life.  I’m inordinately proud of that script, especially because my two amazing boys played such a large role in it.

When I started writing MONSTER MAMA, I decided to read the boys the first act.  They were riveted in a way I hadn’t seen them in years.  Not only that, they had suggestions about the story I’d created to go along with the amazing book I’d optioned.  Their suggestions were great, so great that I incorporated them.  Each time I wrote a new draft, the boys would read it.  In fact, one morning, I woke up to find my older son, pen in hand, reading a draft and giving me notes (yes, in Hollywood, everyone’s a critic).  Both boys still love this script and talk about not “if” it will be made, but “when.”  MONSTER MAMA made me realize just how valuable it was for me to write from my core, not just for me as a person, but for my family as well.

I was starting to figure out what kind of dog I was.

When I heard about the AFI Directing Workshop for Women Open House, I almost didn’t go.  I was scared.  I’d wanted to direct for years and had shied away from it as I had writing, certain I didn’t have the talent to succeed.  But this was After Diagnosis.  Nothing was the same, right?  I’d directed a couple of short shorts and had loved doing it.  Directing felt more right to me than any other job I’d ever had, including screenwriting.  I forced myself to go to that AFI/DWW Open House.  Once there, I discovered just how much I wanted to be a part of that program.  Here was an opportunity to do what I longed to for years – dive into directing, find my creative voice and run with it.  I’d done it as a screenwriter, why not do it as a director?

And so here I am, in the thick of the AFI/DWW program, still nervous each day, still figuring out my directorial voice, but gaining confidence and strength with each moment.  I’ve found my inner voice, one that speaks from vulnerability, longing, laughter, sarcasm, anger and pain. Being a big dog had nothing to do with that discovery.  I got there with my family.